Seems the 2012-2022 Olympic Shows match the recent predictions of Jazweeh to a most alarming extent.

The Phoenix bird being an on going theme of Olympic shows. We see a parallel of the Phoenix and the fourth angel of fire bringing scorching to mankind.
We at Jazweeh.com & Mikefromaroundtheworld.com did not write the prophecies of the white horse.

Yet comments on Jazweeh condemn her predictions.  The commenter’s insight that Jazweeh is “cursed & of the devil” as he uses against us the “don’t change the words of the bible or else” script to be “accursed”.

We follow Jesus’ leading “BLESS AND CURSE NOT” in spite of such biblical contradictions and supernatural changes.    Commenters condemn Jazweeh saying her visions of the firebird/angel confirmed by both Hopi prophecy and Revelation 8:12.

The show of Olympics clearly shows the fourth angel prophecy. 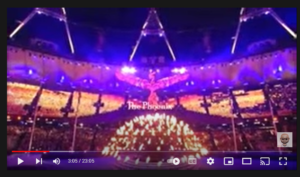 Thanks to TOL End Times on Youtube for this great recapture of Olympic shows from 2012 to 2022.