So too shall God’s Children Survive Eternally

What The Elite (those in the know $$) Won’t Tell the Public due to the terrifying repercussions.

We see the fiery Phoenix in the skies over Earth.  For nearly 5 years I have watched the bright Fire Angel called the Blue Kachina dance, spin, and fly west seen in the southern skies of the U.S.  Binoculars and Faith are needed to see her.  She sends a message from our Creator.  The New Earth Eternal Comes.  But first the old earth must burn.

Do Not Read This Unless You Desire Truth at Any Cost.  And I could be wrong problem is, it’s not my idea.  Prophesies of the earth’s demise by fire are biblical.

Now that we realize the immortal & God sent Phoenix bird is upon us.  Earth and mankind will burn up with fire as prophesied.  Ye need not fear suffocation due to the horrid atmosphere.  Can you smell the carbon monoxide?  Men’s hearts will fail before such a panic driven suffocation ensues.  That will be a blessing.

Long term low oxygen affect brain and heart.  There is only one escape and two options.  Either you are destined to seed the New Earth.  Or you soon go to your eternal paradise home whatever you Faith dictates.  Put Faith where Faith is safe, in God not man’s solutions.  Still, follow your heart.  If preparations are warranted by spiritual design surely that leading is true.

The fires already rage.  The air is losing oxygen levels and gaining flammable atmospheric changes.  Now we know why the elite have gone deep into the earth.  The elite cover up the real problems on Earth with the by-Russ propaganda.

Babies of mothers who took it while pregnant have a challenge to nurture black eyed infants with very high biting survival instincts.  These babies and mothers have likely deleted their own, God given, spiritual, DNA right out of their biology. Not all, not all.  God bestows Grace where He chooses. 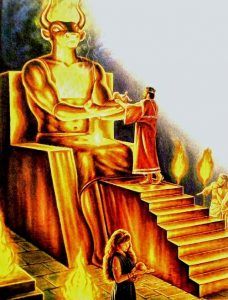 And it’s no wonder the elite didn’t include us in their privy knowledge of our demise.  Men would panic like dangerous animals.

My own fear of underground shelter, cities, homes, condos, and farms would not allow me such privilege even if I were a millionaire offered the gold coin of life.  A condo under earth.  In time they will pray the mountains release them but there will be no exit.

Hope & Faith are not just empty platitudes rather they are eternal gifts.  ETERNAL GIFTS.  That means whatever you put your Faith in, since ALL men are given a measure of Faith…it is that which hold your eternity.  That’s why its urgent you don’t comply with a false god.  If you make your god a door knob when what power does that doorknob have to bring you to your eternal home?  Faith MUST be put in God Himself & in Jesus.

To know Jesus is to put Faith in a place of Love.  God is Love.  Seek and ye shall find.  Knock and it shall be opened unto you.  Once a man establishes a relationship with God he then Hope’s his salvation is secure.  Eternal Hope is why the helmet of the Hope of salvation protects you spiritual mind.

What of the Faithful on Earth?

Ye shall either go to your eternal home with Jesus or you shall be destined for the New Earth.  The New Earth will be seeded with the New Eternal Nature accommodating our new immortal bodies.  Not all shall die but we shall all be changed.

Jazweeh saw that some shall go to a stasis like reality where they are in their own faith driven paradise for a kind of storage.  They shall stay in stasis for 1,000 years while the New Earth is seeded with the new nature and it grows to it’s life giving potential.  Then those in stasis who are appointed shall have their eternal white light homes on the new earth.  Other’s will go to Heaven to be with God The Father.  Others shall not sleep but will work.  The 144 (warriors) & 133 (those who go before the throne)  will seed the New Earth as God’s trusted servants.  Their hearts are for Earth and they will be filled with Jesus’ Spirit of Love, Truth, & Divine Knowledge.  They are caretakers, Guardians of the New Earth not “rulers” as the Christians would call them.

For NEVER again shall God allow his Earth to be desecrated by ungodly men.  Evil was permitted to give men their choices & consequences.

One thing sure, Jesus is returning.  But not in the way the Christians picture it by their preacher stories and Hollywood depictions.

Will there be a Rapture?

Many shall go to their eternal homes.  This means death then rapture/resurrection.  For it is appointed once for all men to die and then the judgement. The 144 God’s elect have already been through their tribulation & death.  Remember those dead do not always stay dead.  While others experience the great tribulation on earth the elect walk through Jacob’s Ladder, Jacob’s trouble.  The elect have their own brand of trouble.

Those already saved who know Jesus have no need to be put through fear by tribulation that leads to salvation.

What does this mean?  The great trib. is to save souls not a wrathful punishment.  God doesn’t punish before judgement.

The Consequences of Sin

Mankind shall suffer man’s own consequences with option for deliverance.   By his actions has mankind sealed his own fateful wrath of nature.  We all participated in the demise of Earth’s life giving provision.

And yet the dark/light Earth was never intended to be eternal.  “For the Earth shall wear out like an old shoe”.

We the people were ignorant of the devastation that we caused by consumerism.  Industry destroyed the air.  Even though we were blinded by selfishness and deceived by corporates greed based lies we had our part.

By the image of the beast TV/phone we were blinded.  Still we at least meant no harm on the consumerism front.  Nevertheless we must all take responsibility for our actions.  We never should have allowed them to take our farms & gardens.

If we do not see our part in this how will we kneel in repentance by the belt of Truth before God?

God doesn’t send out punishment prior to judgement.  That would not be logical.

Who Are the Chosen Few?  The Scribe of God Writes what she is led.

The 144 have already died on Earth some more than once.  They were revived.  This is part of their tribulation and prodigal walk.  They went through the entire gambit of desperate trials on Earth.   Why?  Death brings back with it spiritual eyes.  Those who die are given the sight.

Being exposed to death opens certain doors.  The elect are tempered by fire.  Would they cling to God or would they curse God and die?  They held on to God all the tighter even through their own walk of deep sin.  They are formed as clay to be appointed to God’s  purpose.

The 144 are a peculiar people.  They come from the dregs of the abused children and are rejected.  They start their walk blind with painful debilitating bondage and they end with victorious testimonies of Jesus’ working in their lives.   They balance child & spiritual warrior.  Not an easy balance.  False pride and anger are their go-to emotions.  They grapple with both while God proclaims to them “My Grace is sufficient for thee for ye are made God’s finery by your weakness.”  But weakness they repel.  The reaction to weakness for them is always -cry to God.  They are properly judged by none.

To be a torch bearer is to be alone.  The torches of Jesus’ return are lit.  No more cries for lost souls.  No more burden’s for the lost by intercession.  It is the time of annunciation the torch bearers proclaim it.  They are the woman of Rev. 12 and they know what a spiritual burden & travail really are.   The intercessors fit the description of the woman.

To the the elect the gospel does not come from the pages of a skewed book.  The true gospel is the testimony of those who know Jesus and came to know Him by their desperation, great need, & misery.

You see, the 144 know something that most men are incapable of looking at.  Most cannot see into it clearly—the elect know their own heart and show it to God freely.  They are the one’s who spent a lifetime as clay in God’s hands.  God showed them who they are in 2017.  Finally.

The Many are Deceived

Unfortunately due to programming most people believe they are the mask that they hide behind.  (I don’t refer to a carnal mask but rather what you may describe as the ego etched in emotional survival skills of reproach.   Baked in self deception.

He who sinneth much loveth much.  By this they learned God’s depth of mercy and Grace.  What else?  Their tribulation was long and hard.  The Great tribulation will not last nearly as long nor will it be filled with as many spiritual lessons that do come with pain.  Nevertheless men shall seek God because of the Earth’s demise.  The old earth must fall so the new one can rise from the ashes.  This has little to do with any planning of the elite.  They do not have near the power that they portray to have.  Nor are their prophesies true.

The elect must endure the test of the burning oven.  Shadrach, Meshach and Abednigo.  They also have endured the observance of the strong delusion and the desecration of the holy place.  They cannot alert anyone of the strong delusion therefore they suffer as Jesus did.  They are alone in their knowledge and no one can relate to them.  Men will mock them of they cast pearls before swine.  So as the 144 watch the prophesies of Jesus one after another, the Christians watch the carnal signs less the wonders.  They see not the many miracles before them.

Did you know in June 2020 A man was again swallowed by a whale?

Those who base the rapture timing on TV programming…know this.  They only prophesy by accident.  Most of their predictions that are fulfilled are by inside knowledge.  Just as the false prophet predicts his financial prophecies by inside information.  The Oracle of Omaha may have all the money but he is lied to by His god.  His gold coin will be refused by the man on the barge.

All the elite will shuffle in the halls of the dead losing their memories (the halls of Amenti) unto judgement.  Unless they humble themselves before Jesus and repent.